Apologies for the silence, travel and pressure of photographic work has kept me away from the BLOG. But I'm back with a few new ones for you starting here with my continuing journey with the EOS R. Now regular readers will know that I've been using the R and getting some great results with it, my feeling is that my creativity has improved a lot with it and I'm back to my old shooting self. As I said previously it has it's limitations and as a pro I don't whinge about them I just work around it. You have to realise that all mirrorless cameras have limitations as the technology is still new and in some ways inferior to the DSLR when pushed hard. BUT there is also no doubt that, for me, the advantages far outweigh anything else. Now I hate pigeonholes, always have. People put me in a bracket of wildlife photographer when I do far more. I guess it's comfortable for some people to do that but not me. So I have become increasingly annoyed at the usual gaggle of armchair or paid boo boys and girls that continually slag off all things Canon. The latest joke they have been spreading is that the R is no good for wildlife as you need a 15 fps motordrive for any wildlife cameras, yawn yawn. I rarely use my fast motordrive for my photography, these days I would rather pick the shots I want that rattle off a thousand frames of something in the talentless spray and hope method of photography. It doesn't matter how fast the drive speed is, it's your eye for a shot that counts. Now I would like the R to be faster, no doubt, but it's not as it's not specifically a wildlife and sports camera. So I just deal with it and to show how stupid this argument is I decided to put the R to the ultimate test....hummingbirds.

Hummingbirds. Tough little fellas, always zipping about and being entirely too busy for my liking. I have always shied away from photographing them as it's usually the domain of the high speed flash specialist and I am certainly not that. In fact I really really hate flash with a passion, it's so limiting to me. I always prefer to shoot in good natural light and use angles and experience to make up for my hatred of flash. So anyway hummingbirds. We were away for a wedding on foreign parts and since we had a day free I booked a great local photographer to show bird lover Suzie and myself some cool hummingbird sites. I only had the R, a 100-400mm lens and a 300mm f2.8, that was it. No 1DX2, I had to work with the R. I had my flash with me, because I thought I might have to, but in the end it just stayed switched off.

The first day was a learning curve and as I watched the hummers I began to work out a pattern for how they moved. I shot mostly against a black background as I wanted to let the colour stand out. Aperture wise I'm around about f8 here, I started off with a shutter speed of 1/4000th and then realised I didn't want frozen wings so came down to 1/1000th and sometimes as low as 1/320th. Anything less was a mess. ISO was irrelevant, the R can handle whatever I need it to.

Here's a few from the first day... 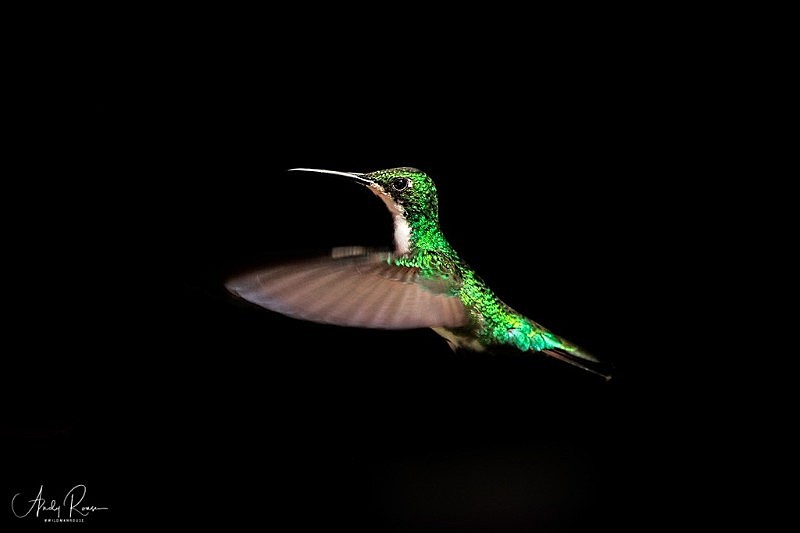 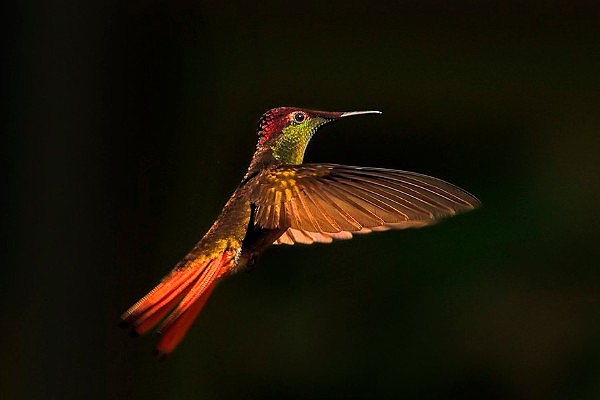 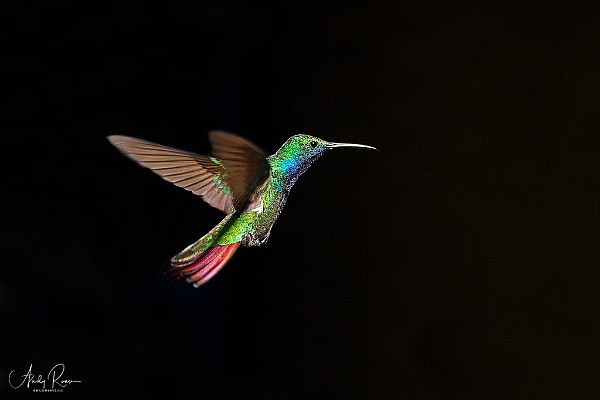 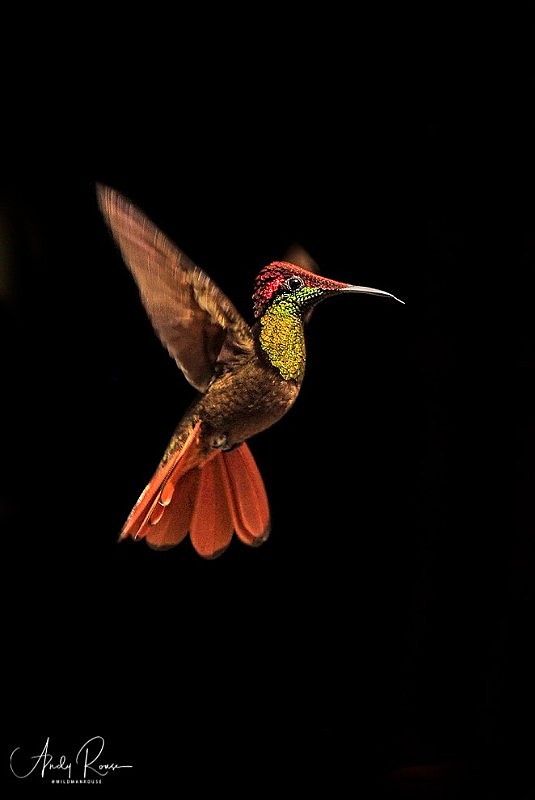 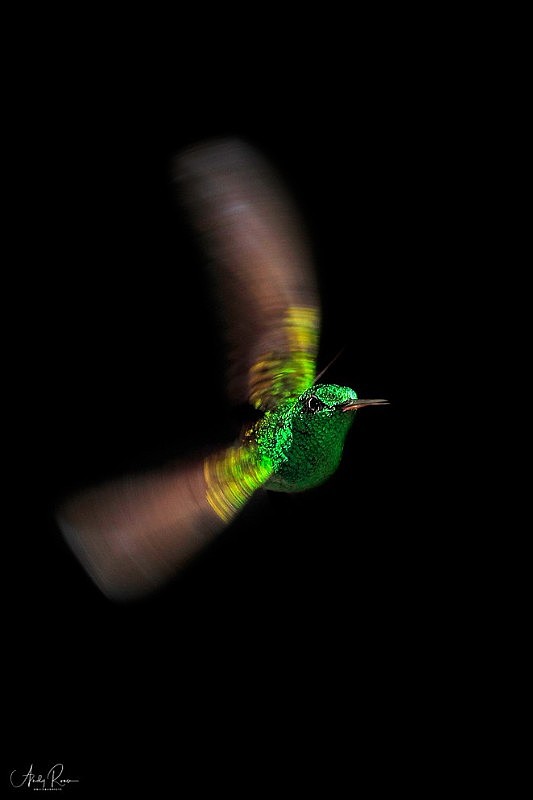 I particularly like the last one above as it flies in the face of convention, which states that the wings must be frozen in time. Actually they all fly in the face of convention being against a dark background but you know what, I like that!! Species wise it's quite a mix, Ruby-Topaz, White-necked jacobin, Copper-rumped plus a black-throated mango that visited once and refused to hover in my direction. A good start but like any good pro I learnt from the experience and on the second day I had a much better shooting plan... 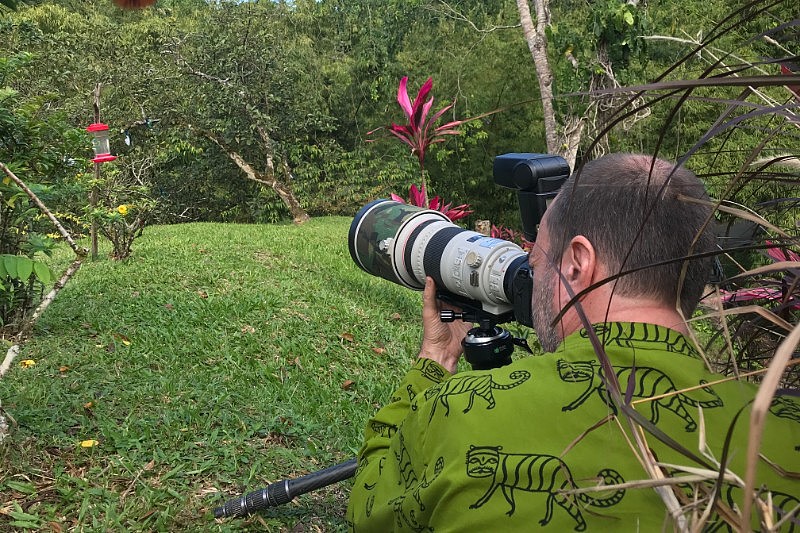 I was basically sat in a painful bush on a slope that killed my back after 5 minutes. I supported the lens with my awesome Flexshooter PRO head. The head allowed me to have a stable platform yet be flexible enough to adapt for a quick adjustment, when I needed to lock up I did so without any change in my composition. You can see the flash is there but it's switched off, in the end I just used beautiful sunlight. So wanna see some images?

The background this time was diffuse green so I used the 300mm f2.8 to accentuate this. My focussing technique involved the EOS R manual focus guides, a new feature taken from Canon's range of video cameras. When a subject is in focus, the manual focus guide turns everything red that's in focus, thus making it so easy to adjust focus quickly to get it perfect. After a bit of practice I soon started to get it right and the R helped me nail some corkers including some fights as you see here... 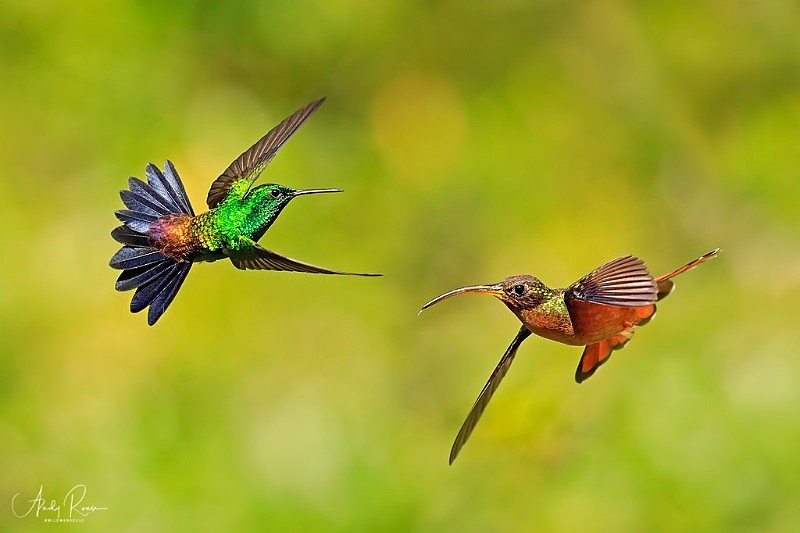 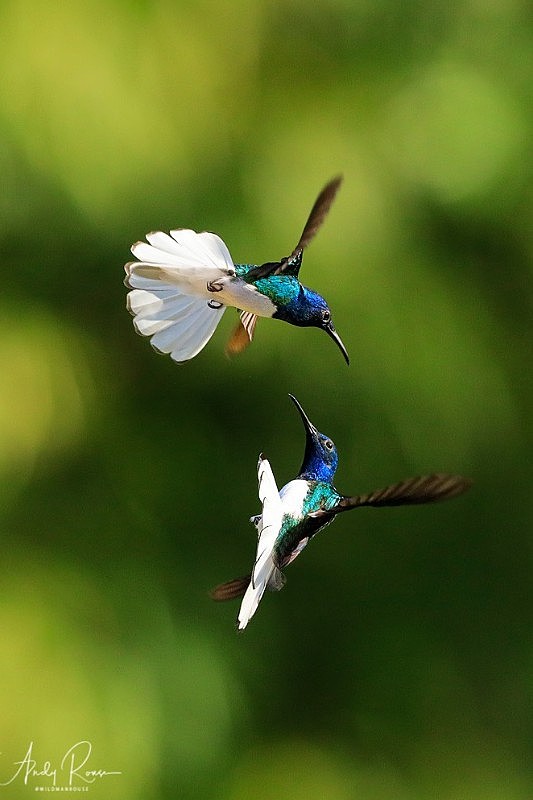 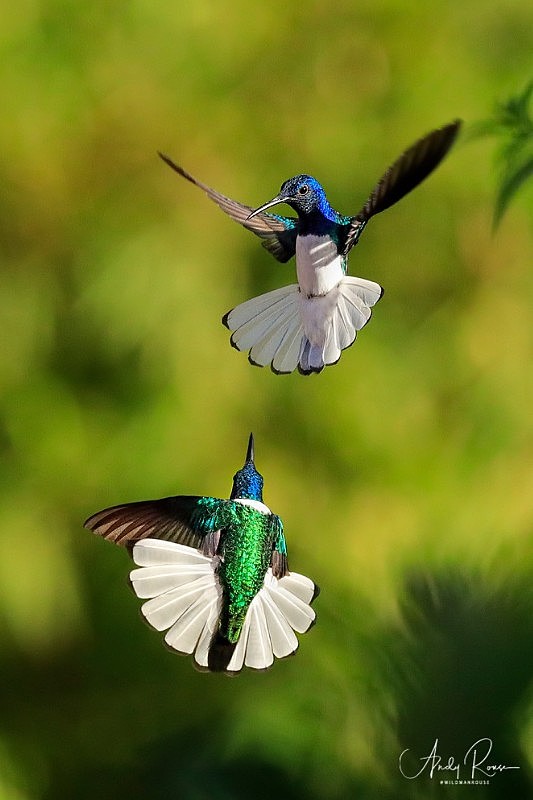 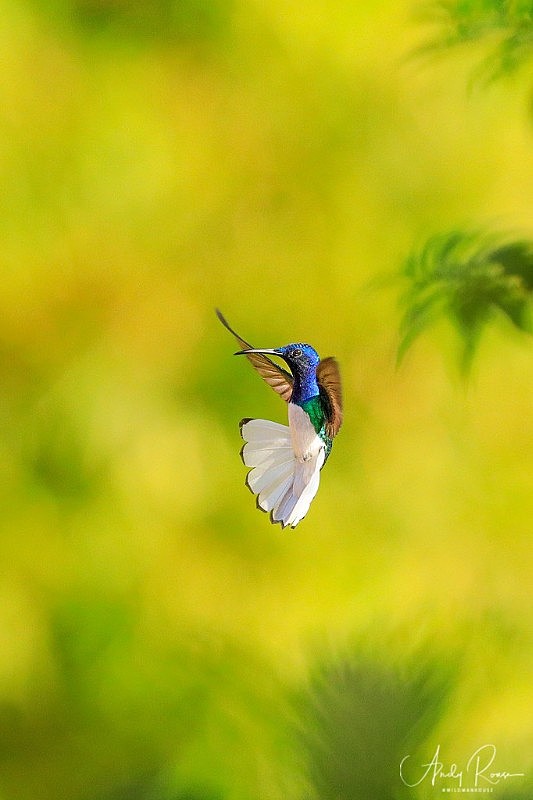 I really like the feeling of space in this image above, it's the Jacobin threat display to anyone that comes near it!

So anyway I made you a video, to show how fast they fly and the beauty of flight when it's slowed down a lot. Enjoy this little movie, uploaded in 1920 HD to make it playable on even the dodgiest of internet like mine!

So what has this proved? Well it has proved that hummingbirds are beautiful and can be photographed by anyone. It's proved that the drive speed is irrelevant if you have the eye and timing to nail a shot, rather than hoping a motordrive will do it for you. Sure the 1DX2 would have got me far more images as it's drive is much faster, but would that mean better images? Or is it better to pick what you need and ensure you get the right shot. I believe that's called photography!

What the R lacks in drive speed it makes up for with the file quality. There is no compromise in size when you shoot, that means you still get the whopping file to process. Since these hummers didn't appreciate me being close I had to crop and expand every image, the R image file took this in it's stride and the quality speaks for itself.

This is the first time I have shot Hummingbirds so I think I've done ok. As usual there were some shots I didn't get that I really wanted, like the perfect Jacobin fight, but considering I only had a few hours there I'm pretty pleased. My story with hummers isn't finished, I'm an addict now and looking forward to my next time with them. As for the R well it's now fought it's way into my camera bag and deposed the 5D4 to the shelf. I've a grip for it how and just tested the awesome drop-in polariser / variable ND kit which was awesome. I'm learning how it fits into my professional life, and how it works alongside my stalwart 1DX2 system. More on that in the next BLOGs!!!